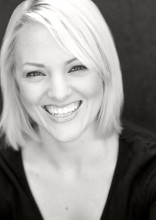 In between completing these courses, Alison appeared in DIRTY ROTTEN SCOUNDRELS (RMS), SNOW WHITE: A WINTER MUSICAL (Bonnie Lythgoe Productions) at the State Theatre, and helped to develop a new musical based on the Terry Pratchett novel GOOD OMENS as part of the New Musicals Australia Organisation.

Most recently Alison was ‘Grandma Addams’ in THE ADDAMS FAMILY (The Very Popular Theatre Company), and a featured artist and dance captain in the ensemble of RENT produced by Hunter Drama. She has also appeared in the National Theatre Company’s production of JESUS CHRIST SUPERSTAR, Metropolitan Players’ production of MARY POPPINS and Musical Directing productions of SINGIN’ IN THE RAIN and ALADDIN with Hunter Drama.

As well as teaching at The Voice Studio, Alison teaches privately all over the Hunter, teaches the Junior, Intermediate and Senior Musical Theatre courses at Hunter Drama.