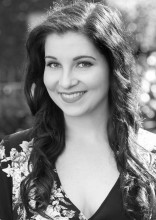 VOCAL MENTOR
Stephanie has been involved in the entertainment industry for over 15 years as a performer, writer, director, session singer, music mentor and teacher.

As a performer, Stephanie has appeared in over 40 theatre productions in the last 10 years, most recently as Philipa in Knock & Run Theatre’s ‘Year of the Rooster’ and Eponine in ‘Les Miserables’ (Metropolitan Players), for which she earned a CONDA nomination for best supporting actress. Stephanie also recently appeared as ‘Girl’ in the short play ‘Welcome’, for Tantrum Theatre’s Trajectory Residency.

Stephanie made her professional theatre debut in 2016, appearing as Jan in Squabbalogic’s ‘The Original Grease’, in Sydney, then Hattie in Squabbalogic’s Mystery Musical #4: ‘Kiss Me Kate’. To begin 2017, Steph performed in the World Premiere of the original musical ‘The Tale Of Ichabod Scrubb’, in Sydney. Most recently, Steph received a special invitation to perform with the Australian renowned composer Matthew Lee Robinson at the OZ Theatrics Junior Music Theatre Celebration in Newcastle.

Alongside her on-stage work, Steph has directed several local theatre pieces, including the short play ‘Train Love’ for Tantrum’s Hisseyfes 2016, The Cold Streak’ for Hisseyfest 2017, and ‘The Jungle Book Junior’ for Newcastle Grammar School. In 2015, Steph co-wrote, directed and starred in the play ‘Unforgettable’ for Short + Sweet Sydney, earning a place in the renowned Top 12.

Steph has studied and gained a Cert 3 in Theatre, a Cert IV in Music Theatre and an Advanced Diploma of Arts – Acting, through RIPA. She has taught drama and singing for over 10 years and has also worked as a professional Humour Therapist and Choir Leader with The Arts Health Institute. As well as teaching with The Voice Studio, Stephanie also works as Lifestyle Officer in the local nursing home Maroba.